Are Payday Loans Legal In The United States – Payday LV

Are you considering applying for a payday loan online and worried about the legality behind these cash loans? Well, you have come to the right place to learn more.

You might be surprised to learn that payday loans aren’t legal all over the United States. In fact, some states have banned high-cost payday lending altogether and enforced strict penalties and repercussions for anyone they feel is violating state laws.

However, in the rest of the United States, payday lending is very much legal, both online and in retail locations. As long as these businesses abide by the specific statutes set by each state they can legally practice payday lending.

However, before we dive into the specific laws, regulations, and legalities governing payday loans let’s first take a look at what these loans are and why they are so popular in many parts of America.

The Popularity Behind Payday Loans

If you are looking for a small loan amount (let’s say $500) that you require urgently, then applying for a payday loan is perhaps your best bet. These short-term loans offer convenience and ease for people who earn a steady income but are faced with a financial emergency and require extra cash right away.

Payday loans generally come with a short payback period. Generally, it’s 14 days, or until your next paycheck. These loans are strictly meant for people who are faced with emergency expenses. They are not meant to pay for daily expenses or outstanding debt.

If you are having trouble managing debt or struggling to pay for your daily expenses you should seek the help of a financial advisor.

Payday loans have much higher annual percentage rates (APRs) as compared to personal loans. This makes them expensive. However, in most states, strict regulations on maximum amounts borrowed and ceilings on interest and fees charged by lenders have brought down the cost of these loans making them a lot more worthwhile.

Fast-processing times, convenience and ease, as well as, instant transfer to bank accounts all make payday loans a viable financial service that is used by millions of American households. 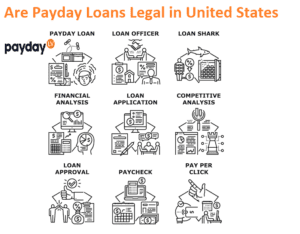 The Legality Of Payday Loans

The concept of payday loans isn’t new. You would think that these types of short-term loans are dependent upon technology and were only recently introduced but you would be wrong. These loans, in fact, have been part of the very fabric of civilizations as far back as the 5th century.

The way these loans are applied for, processed, and granted are also a lot more efficient, safer, and convenient than they once were. However, with these added perks these loans also tend to come with high-interest rates and fees that have made them a subject of discussion for governments, regulators, business owners, and customers alike.

Today, payday loans are subject to state regulation. As such, the legality behind payday loans largely depends upon which state you live in and the payday laws that exist in that region.

Each state has its own set of laws and regulations that govern how a payday loan is to be issued, the maximum amount a borrower can borrow at any given time, and the manner and time frame the loan amount is to be repaid.

In What States Are Payday Loans Legal?

In What States Are Payday Loans Illegal?

How To Apply For Payday Loans Online via Payday LV?

As long as you live in a state that authorizes payday lending there isn’t much in terms of legality that you need to worry about. What you should really worry about is finding the best rates and repayment terms you can; whether it be from a physical payday lender branch or online.

But first, let’s take a look at what you will need when applying for a payday loan.

This proof can be presented in the form of the receipt of your last paycheck, an employment letter that clearly states your bi-weekly or monthly income, or any bank deposits that can be considered as income.

Once this information is provided and everything matches as it should you will be issued cash, check, or bank deposit for the agreed-upon loan amount. Processing times are often lightning-fast and are one of the main reasons why payday loans are so popular.

As far as legality is concerned payday loans can be perfectly legal or prohibited depending on the state or region you live in. It is best to always visit your state website https://www.paydaylv.com and read up on laws governing short-term lending including payday loans.

These forms of short-term loans can provide much-needed financial relief and depending on which state you live in shouldn’t cost more than $15-$20 per $100 borrowed. Considering the convenience and ease that isn’t necessarily a lot of money as long as you can cover it on your next paycheck! 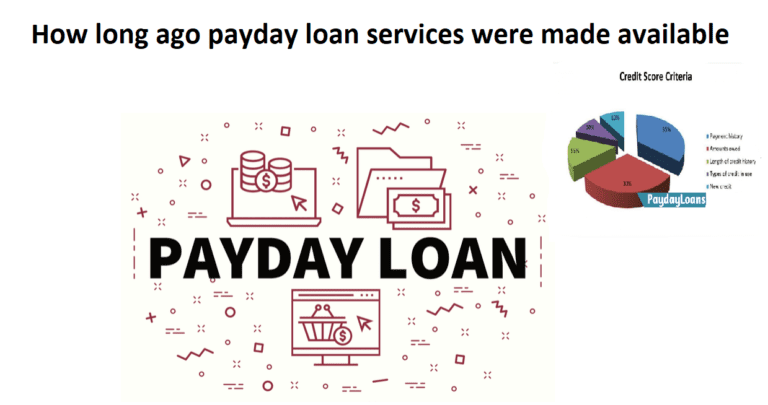 How long ago payday loan services were made available : Payday LV